The other day a coworker came to me with a Tricky Language Question. He and another chap had just finished working through a bug that had arisen due to a misunderstanding of C# constructor and field initialization order. The question?

In a derived class, when does field initialization occur, relative the derived and base constructor code?

Specifically, what does this output?

I don't often give much thought to the "field vs. base class constructor" thing, but I knew that the Base constructor would be called before the Derived constructor, and I'd seen disassembled code in Reflector that showed field initialization as if it were the first code executed in a constructor. My guess was:

"Not so," said my coworker. The actual order is

The reason for this is given in C# Language Specification section 17.10.3, Constructor execution:

"What's the problem here?" you may be wondering - the Base code doesn't know anything about the Derived fields, so why go out of our way to make sure the field initializers are called before the Derived constructor?

So how to do we safely call virtual methods in constructors? We don't. You can't guarantee what code is going to go into a derived class's virtual method, so you never know what's going to happen.

Remember a few paragraphs ago when I said that Reflector told me that field initialization acted like it was an assignment statement at the beginning of a constructor? Well, I did, and I wanted to see whether I was misremembering, so I compiled my sample code and threw the assembly into Reflector. Here's what I saw:

I felt somewhat vindicated - this matched my memory. For a lark, I took this code (and the matching code Reflector showed me for the Base class), compiled it, ran it, and got:

The more I thought about this, though, the worse I felt. How could Reflector let me down like this? Isn't it just looking at the IL and translating into C#? I poked around a little more, and instead of just double-clicking on the Derived constructor, I right-clicked on the Derived class node in the navigation tree and picked Disassemble. Lo and behold: 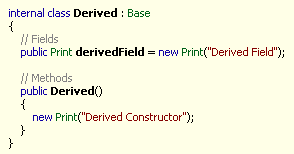 So, Reflector does know what's going on—you just have to ask nice. To recap,

Reflector can tell you what's going on in your code. Forget any of those things, and you're lost.