OpenCover is developed by Shaun Wilde. He was a developer on (and is the only remaining maintainer of) PartCover. He's used what he learned working on PartCover to develop OpenCover, but OpenCover is a new implementation, not a port.

I tried OpenCover 1.0.514. Since I downloaded a couple weeks ago there have been 3 more releases, with the 1.0.606 release promising a big performance improvement.

Free! And you can get the source.

None that I can find.

Covering an application from the command line is easy, and reminiscent of using PartCover the same way. I used this command to see what code my BookFinder unit tests exercised:

Let's look at that.

There isn't one, but I have to wonder if there won't be. Otherwise, why call the command line coverer OpenCover.Console.exe?

OpenCover doesn't generate a human-readable report. Instead, you can postprocess the coverage output. ReportGenerator is the recommended tool, and it works like a charm.

generates an XML report in the Xml directory. The summary looks like this:

ReportGenerator also generates Html and LaTeX output, with a "summary" variant for each of the three output types.

The XML report would be most useful for inclusion in build result reports, but I found the HTML version easy to use to examine coverage results down to the method level. 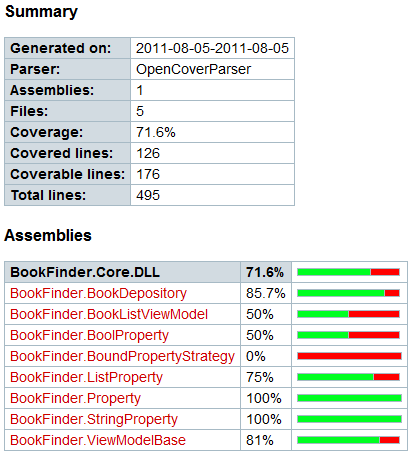 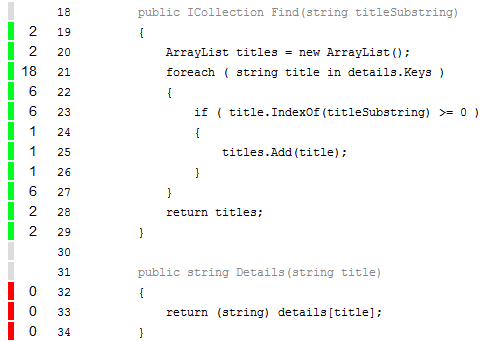 I appreciate the coverage count by each of the lines - not as fancy as dotCover's "which tests cover this", but it could be a helpful clue when you're trying to decide what you need to do to improve your coverage.

Perhaps your test are scattered in space or time and you want to get an overview of all the code that's covered by them. OpenCover doesn't really do anything special for you, but ReportGenerator has your back. Specify multiple input files on the command line, and the results will be aggregated and added to a comprehensive report:

There's no built-in auto-deploy for OpenCover. However, I made my own auto-deployable package like so:

Then I just made sure my coverage build step

That's it. No muss, no fuss. I did a similar (but easier, since there's no registration needed) trick with ReportGenerator, and all of a sudden I have a no-deploy system.

In less than an hour's work, I could upgrade a project so the build servers and all the developers could run a coverage target, with no action on their part, other than pulling the updated source tree and building. (Which is pretty much what the build server does all day long anyhow...)

DIY (for now) Coverage with Isoloator

Isoloator and OpenCover don't work together out of the box, but thanks to advice I got from Igal Tabachnik, Typemock employee, it was not hard to change this.

Isolator's supported coverage tools are partly configurable. There is a typemockconfig.xml under the Isolator install directory - typically %ProgramFiles (x86)%\Typemock\Isoloator\6.0 (or %ProgramFiles%, I suppose). Mr. Tabachnik had me add

to the ProfilerList element, and everything meshed. His StackOverflow answer provides full details and suggests that official support for OpenCover will be added to Isolator.

I can't find any special IIS support. I'm not saying OpenCover can't be used to cover an application running in IIS, only that I didn't find any help for it. I may investigate this later.

I really like OpenCover. It's easy to use, relatively full-featured, and free. In a work environment, where there's a tonne of developers who want the in-IDE profiling experience, it may not be the best bet, but I'd use it for my personal .NET projects in a flash.