I've never been really comfortable with the Windows Command prompt - whenever I can, I grab Cygwin to give myself a more familiar (and powerful) command-line environment. I really appreciate the tools included with the Unix command shells, as well as the easy composability of the utilities that come with Unix.

Unsurprisingly, I was immediately attracted to PowerShell - a powerful replacement shell for Windows, with .NET integration, a Unix-like pipeline that works on objects rather than strings, and has plenty of built-in cmdlets. I installed it and tried to work. There were familiar commands (many of the Unix and Windows command names are aliased to their PowerShell equivalents), and these both helped and hindered - it was easy to find a command, but the options were slightly off, so the commands my fingers knew produced errors or unexpected results. Eventually I fell off the wagon, reverting to cmd.exe. Over the next year or so, I would return to PowerShell, only to stop using it again.

A few months ago, I was talking to the Guy in the Next Cubicle. He was also interested in PowerShell. We talked a little about the few scripts (neither of us had written new cmdlets) we'd made, and shared them. Having someone to talk to about PowerShell sparked something, and gave me the impetus to change my shortcuts to start PowerShell instead of cmd.exe. Unfortunately, sharing our scripts was awkward - usually via e-mail or instant messaging. In addition, as we improved our scripts, adding some to perform common tasks, we found the answers to some questions when people came for help was, "Well, if you had this PowerShell script, you'd just...", with no convenient way to get them the scripts.

Finally we decided to do something about it, and initiated a plan to help share our setup among our coworkers. We wanted a system that:

Inspired by Joey Hess's keeping your life in svn, we tried putting the whole profile directory under Subversion control. It was an easy choice, since everyone at the Day Job is already using Subversion to wrangle our source code.

Getting started with the profile is almost as easy as running

After this, the user will have a directory inside their My Documents directory that looks something like this: 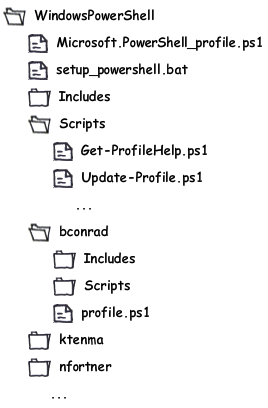 It's not quite usable, though. By default PowerShell doesn't allow scripts to be run, so the new profile will be of no benefit to users. To ease their pain, the profile directory contains a setup_powershell.bat which runs

After running setup_powershell.bat, all a user has to do is start PowerShell and they will benefit from the new profile.

The first item of note inside the WindowsPowerShellDirectory is the Includes directory, which is populated with .ps1 files. Each .ps1 file contains functions to be loaded into memory and made available for the user's session. At startup, each of these .ps1 files are each dot-sourced (using the dot-source from a function trick I talked about last time).

Next, the Scripts directory, which is added to the user's $env:PATH. Each of the .ps1 files in the directory contains a standalone script that a user might choose to execute as they work. We have a number of Day Job-specific scripts as well as some Subversion helpers and two meta-scripts, designed to make it easier to work with the PowerShell profile.

Since new users won't be familiar with all the scripts in the profile, and because new scripts might be added at any time, we include a script to provide a quick synopsis of the available scripts: Get-ProfileHelp. It scans the Scripts directory, printing out, in an easy-to-read table, the Synopsis from the top of each script.

Get help for the PowerShellProfile scripts

Rather than forcing users to navigate to the profile directory and run an svn command, the Update-Profile.ps1 script will automatically update the profile source:

Get the latest version of the PowerShell profile from SVN

If a user runs PowerShell and doesn't already have a profile directory, a welcome message is printed to the screen, explaining basic usage of the profile. Then a profile directory is created and populated with an empty profile.ps1 to get the user started and to keep them from being welcomed again.

Putting it All Together

Finally we see the Microsoft.PowerShell_profile.ps1 file that orchestrates all this:

Don't check in as "true"

- useful for importing from relative paths

function Include-ProfileDirectory([string] $directory) { # Load every file in the Includes subdirectory - # hopefully they can be loaded in any order. # The Includes directory should contain files that define functions and # filters to be executed later, but not scripts that need to do # something when the file is sourced. if ( Test-Path ($directory + '\Includes') ) { Get-ChildItem -Path:($directory + '\Includes') -Filter:*.ps1 | ForEach-Object { if ( $verbose ) { Write-Output ("importing " + $.PSPath) } . $.PSPath } }

directly, all the included functions will be scoped inside the

Include-ProfileDirectory command, and inaccessible to the user.

Look for user-specfic customizations. If they're there, load them.

Welcome to the DayJob PowerShell Profile. It looks like this is your first time here, so I'll create a new profile for you. This profile will be called

If you want to customize your PowerShell experience, you can edit this file. Eventually you may want to modify files in the containing directories, but keep in mind that those changes will affect other users.